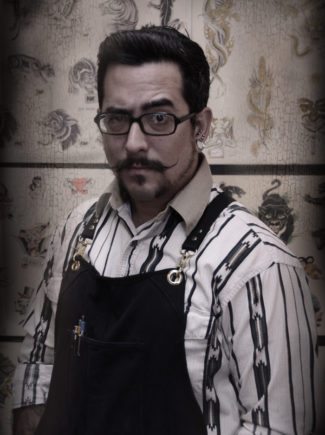 Like most artistically inclined children, Daniel was told from an early age “Don’t quit your day job”. This was confusing, considering he didn’t have a day job at the time, so he decided to go into electronics.

After a tour in the United States Navy as a radar technician, and a short stint as a professional tech in the civilian world, Daniel decided that grown up life sucked, and he went into building fine furniture. Using the funds created from woodworking to hatch an evil plan to become a tattooist, he began his tattoo career in 2006 (diverting for a short amount of time to hone his evil run-on sentence abilities).

Daniel spent the first years of his tattoo career working seven days a week, twelve hours per day, doing the best he could to make himself as competent at his craft as he could manage. Tattooing has established itself as a true love and passion in Daniel’s life.

Now after years of hard work, Daniel is proud resident at Slave to the Needle, ready to provide you with all the silliness, hard work, and dedication he has to offer.

Completed tiddy kitty for Niko. Some folks come at ya with 9000 ideas they want all stuffed into the same tat on their forearm and they're real resistant to ideas that might make their thing workable. Size constraints. Layout. The works. Niko is the opposite of that. Always comes with a clean idea and a blank slate for how i get to play it out. Thanks for always letting me be my best self Niko.
-
-
-
-
-
-
-
-
-
-
-
-
-
-
-
#slavetotheneedle #sttn #japanesetattoo #tiger #tigertattoo #tattoosnob #seattletattoo #seattletattooartist #pnwtattoo #pnwtattooartist #tattoosofinstagram #tattoos #tattoo ...

Maps were disabled by the visitor on this site. Click to open the map in a new window.